Fostering Friendship at Our Branches 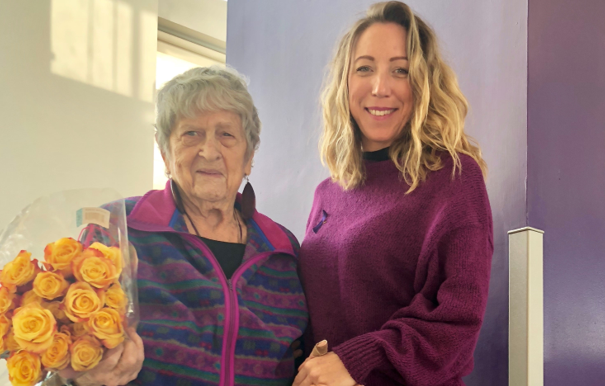 When the snow and deep freeze hit New York City in early January, many members struggled to make it to the Y as usual. Beth Marie Kolacki, Healthy Lifestyles Director at the Dodge YMCA, was particularly worried about how Marilyn Goldsmith, 91, who lost her sight in her 80s, would deal with the storm. In the past, Kolacki paid for a car to take Goldsmith home when it was too icy to walk. It’s just one way she cares for one of her favorite members.

Kolacki and Goldsmith’s relationship is one of countless, unique friendships formed at the Y’s 24 branches. Employees take special interest in members’ well-being, while also forging meaningful friendships among themselves.

“Beth is ever-ready to help me,” said Goldsmith. “She’s full of reassurances. She has a very positive outlook on everything.”

Goldsmith was a Y member for years, and enjoyed classes like water aerobics, but her membership lapsed when she went legally blind. She came back two years ago, hoping to return to fitness despite her disability.

“She was really disappointed with where she was,” said Kolacki, who’s worked at a YMCA since she was 16. “She’d lived an adventurous life, and felt like that had been taken away from her. But nothing stops her.”

Goldsmith was too nervous to rejoin water aerobics given her vision loss, so Kolacki designed a new routine that included chair-based classes. Since then, Goldsmith has worked out four days a week, despite a broken hip and ensuing chronic pain.

Goldsmith’s family threw her a 90th birthday party at Dodge — she told them she wouldn’t want to celebrate anywhere else — and Kolacki and Goldsmith catch up almost every day. Once Goldsmith, who knows Kolacki loves vintage clothing, gave her an oversized black vintage sweater from her collection, which is now among her favorites.

Kolacki’s genuine interest in others has also impacted her staff. She and Oliver Lopez, who both started at the Dodge Y four years ago, have become close friends. Lopez started as a floor trainer and worked his way up to Healthy Lifestyles Coordinator.

“Beth was key in my development, and gave me opportunities to grow,” he said.

But Kolacki went a step further, helping advise Lopez on his career and even helped him find an apartment. “She became a closer and closer friend that was always around,” Lopez said.

When Goldsmith’s children suggested it was time for her to move to an assisted living center, she told them no. Soon after, her daughter and granddaughter visited from Oregon, and she brought them to a chair yoga class.

“My daughter said ‘Mom, I get it,’” Goldsmith said. “She saw the reception I got when I walked through the door. And Beth, she always keeps her ears open for clues about people’s needs. She’s just made it all sound possible.”