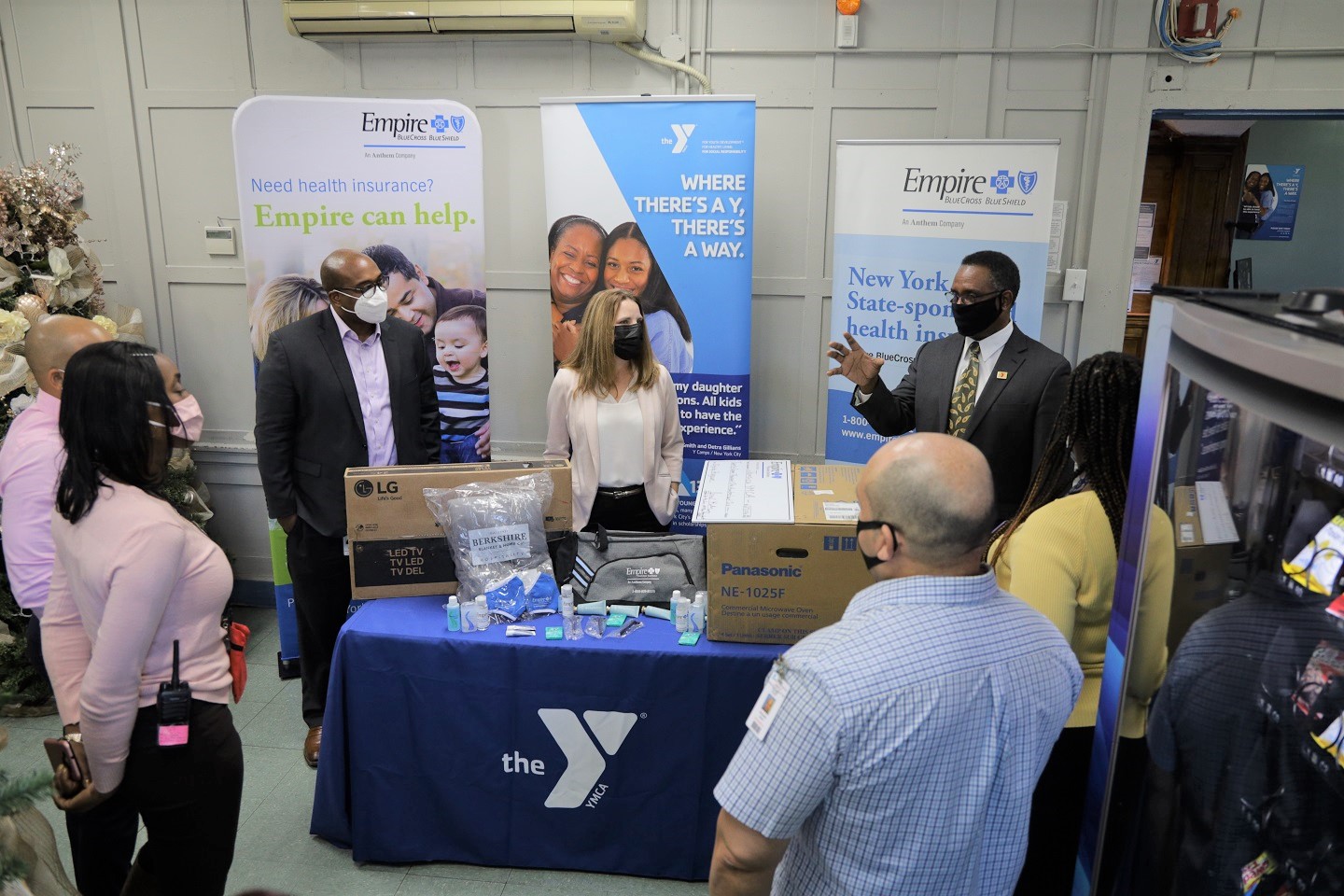 Above: Empire’s Jennifer Kuhn joined the YMCA’s Cedric Dew to present a $25,000 check to fund upgrades for the Transitional Housing program at the YMCA’s Jamaica branch

With homelessness on the rise in New York City, Empire is stepping in to upgrade the Jamaica YMCA transitional facility with fresh bedding, mattresses & beds, microwaves, mini-fridges, televisions, toiletries, masks and duffel bags to support residents as they prepare for their next journey.

NEW YORK, NY – In support of the YMCA of Greater New York’s Dignity Initiative, Empire BlueCross BlueShield (Empire) is providing more than $25,000 to fund essential upgrades for the Transitional Housing program at the YMCA’s Jamaica branch. Empire’s funding will provide the facility with fresh bedding, mattresses & beds, microwaves, mini-fridges, televisions, and will provide residents with toiletries, masks and duffel bags as they prepare for their next journey after their time spent at the Jamaica YMCA.

This Dignity Initiative at the Jamaica YMCA is part of an effort to address homelessness in New York City and more specifically, the Queens community. Each year more than 400 people will come to the Jamaica YMCA Transitional Housing program and stay in one of the facility’s 269 spots for three to six months while in the search for housing, employment, and other needed services. The Jamaica YMCA offers residents three meals a day, a room with amenities like refrigerators, television, air conditioning, and importantly, a safe haven off the street. Many of the people the Y serves have special needs such as living in a wheelchair, managing HIV/AIDS or recovering from substance abuse.

“We are on a mission to materially and measurably improve the health of all New Yorkers, and we know that having a comfortable place to live is an essential part of good health,” said Jennifer Kuhn, Empire BlueCross BlueShield Medicaid Plan President. “We’re humbled to support the work that’s happening at the Jamaica YMCA to ensure New Yorkers have warmth and safety as they work to improve their health and move their lives in a positive direction.”

“The Jamaica YMCA is a cornerstone in the Queens community, and our Transitional Housing program provides many people with the opportunity to begin recovery and find a fresh start,” said Cedric Dew, Senior Executive Director of the Jamaica YMCA. “As temperatures start dropping in New York City, we’re thankful for Empire’s contribution to upgrade our facility. We know these changes will help our residents to feel more comfortable and restore their sense of dignity as they look to the future.”

The YMCA of Greater New York has six branches across the city with transitional housing facilities, serving more than 1,200 New Yorkers in need.

Serving New Yorkers for 80 years, Empire BlueCross BlueShield (Empire) is on a mission to materially and measurably improve the health of New Yorkers. Empire is the largest health insurer in New York supporting more than four million members and more than 38,000 business, union and small employers in New York. Empire is the trade name of Empire HealthChoice Assurance, Inc., and Empire Blue Cross Blue Shield HMO is the trade name of Empire HealthChoice HMO, Inc., independent licensees of the Blue Cross Blue Shield Association, serving residents and businesses in the 28 eastern and southeastern counties of New York State. Additional information about Empire is available at www.empireblue.com. Also, follow us on Twitter at @empirebcbs.

About the YMCA of Greater New York

The YMCA of Greater New York is here for all New Yorkers — to empower youth, improve health, and strengthen community. Founded in 1852, today the Y serves a diverse population of more than half a million New Yorkers who learn, grow, and thrive through programs and services at our 24 branches. Community is the cornerstone of the Y. Together, we connect active, engaged New Yorkers to build stronger communities. Follow us on Facebook, Twitter, and Instagram at @ymcanyc.