CHICAGO, Sept. 13, 2017 /PRNewswire/ -- Starting this Friday, September 15 and running through September 24, YMCA of the USA (Y-USA) joins local Ys and other organizations for Welcoming America's Welcoming Week, a national celebration designed to honor immigrants' contributions to society and bring people from all backgrounds together in a spirit of unity through community-based events. The Y's Welcoming Week events are open to the public and include activities to build awareness of the diversity within a community and promote cross-cultural understanding between immigrants and U.S.-born residents. 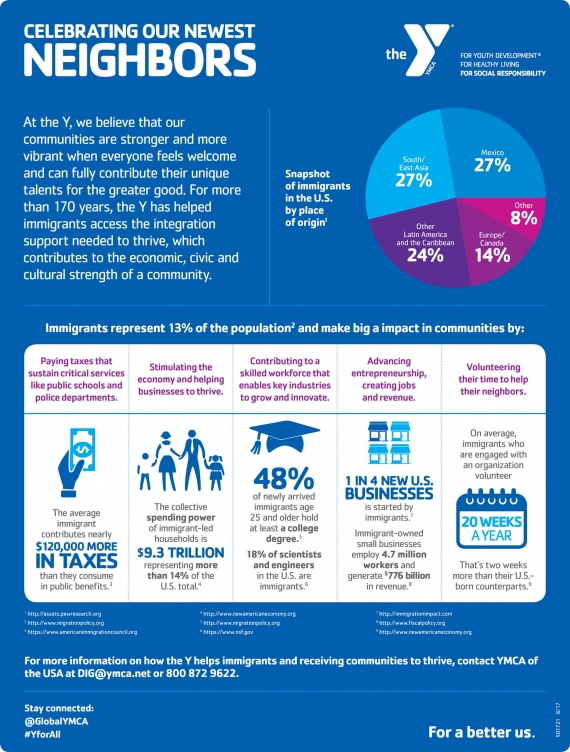 Immigrants are an integral part of the fabric of America, past and present, and communities that are welcoming can benefit economically, socially and culturally. The socioeconomic impact of a well-adjusted newcomer population is indisputable; 1 in 4 new businesses in the U.S. is started by immigrants. Immigrant-owned small businesses employ 4.7 million workers and generate $776 billion in revenue. Additionally, immigrant-led households represent over $9.3 trillionof the U.S. spending power. Forty-eight percent of newcomers aged 25 and up hold a college degree and more than 18 percent of scientists and engineers in the U.S. are immigrants. When given the opportunity, newcomers offer immense value to our communities, and the Y and Welcoming America are committed to ensuring that value is realized.

"At the Y, we are firm believers that our communities are more prosperous and cohesive when everyone feels welcomed and has equitable access to resources to reach their full potential," said Lynda Gonzales-Chavez, Senior Vice President and Chief Diversity Officer, YMCA of the USA. "Welcoming Week is an opportunity for neighbors – both immigrants and U.S.-born residents – to connect, find common ground and celebrate our shared values to strengthen our communities for all."

This year, Ys across the U.S. will host events at over 300 locations, nearly three times the number of locations from 2016. "The Y is leading by example—showing that inclusion is an imperative for building stronger communities," said David Lubell, Founder and Executive Director of Welcoming America. "Our partnership during Welcoming Week is further evidence of the growing movement of neighbors of all backgrounds showing unity in a time when we need it most."

Welcoming Week runs from September 15-24, in communities large and small nationwide. On September 15, Y-USA and Welcoming America will help to kick off Welcoming Week at an event hosted by the YMCA of Greater New York at the Queens Museum in Flushing, N.Y., historically one of the most vibrant and diverse communities in America. The event will feature Get Empowered, who will offer interactive welcoming and unifying activities, including Brazilian Capoeira, drumming circles, origami, and other opportunities to unify, engage, connect, and build bridges between immigrant and U.S.-born communities.

"For centuries, New York City has been a beacon for new immigrants seeking to fulfill their American dreams. There's no better place to kick off Welcoming Week, where people of all backgrounds connect to strengthen our communities," said Sharon Greenberger, President and CEO, YMCA of Greater New York. "New York City's YMCA has embraced new Americans since our settlement projects on Ellis Island in 1909. Today, with an increasingly diverse city, we remain committed to helping newcomers succeed and thrive."

About the Y
The Y is one of the nation's leading nonprofits strengthening communities through youth development, healthy living and social responsibility. Across the U.S., 2,700 Ys engage 22 million men, women and children – regardless of age, income or background – to nurture the potential of children and teens, improve the nation's health and well-being, and provide opportunities to give back and support neighbors. Anchored in more than 10,000 communities, the Y has the long-standing relationships and physical presence not just to promise, but to deliver, lasting personal and social change. ymca.net

About Welcoming Week
Welcoming Week is an annual celebration bringing together thousands of people and hundreds of local events that celebrate the contributions of immigrants and refugees and the role communities play to foster greater welcome. Welcoming Week is Sept. 15-24 across the country and now expanding to other parts of the world.

Welcoming America is leading a movement of inclusive communities becoming more prosperous by making everyone who lives there feel like they belong. Welcoming America believes that all people, including immigrants, are valued contributors and vital to the success of both our communities and our shared future. www.welcomingamerica.org.

About YMCA of Greater New York's New American Initiative
New York City's YMCA founded its New Americans Initiative in 1981, making the Y one of the largest immigrant service providers in the City. Since 2006, New York City's YMCA has opened six New Americans Welcome Centers, which offer citizenship preparation courses, English language classes, and other services to help immigrants reach their goals and integrate into American society. The Centers support more than 5,000 immigrants and their families annually, and New York City's success led Y-USA to implement the model nationally in 2016.

SOURCE YMCA of the USA