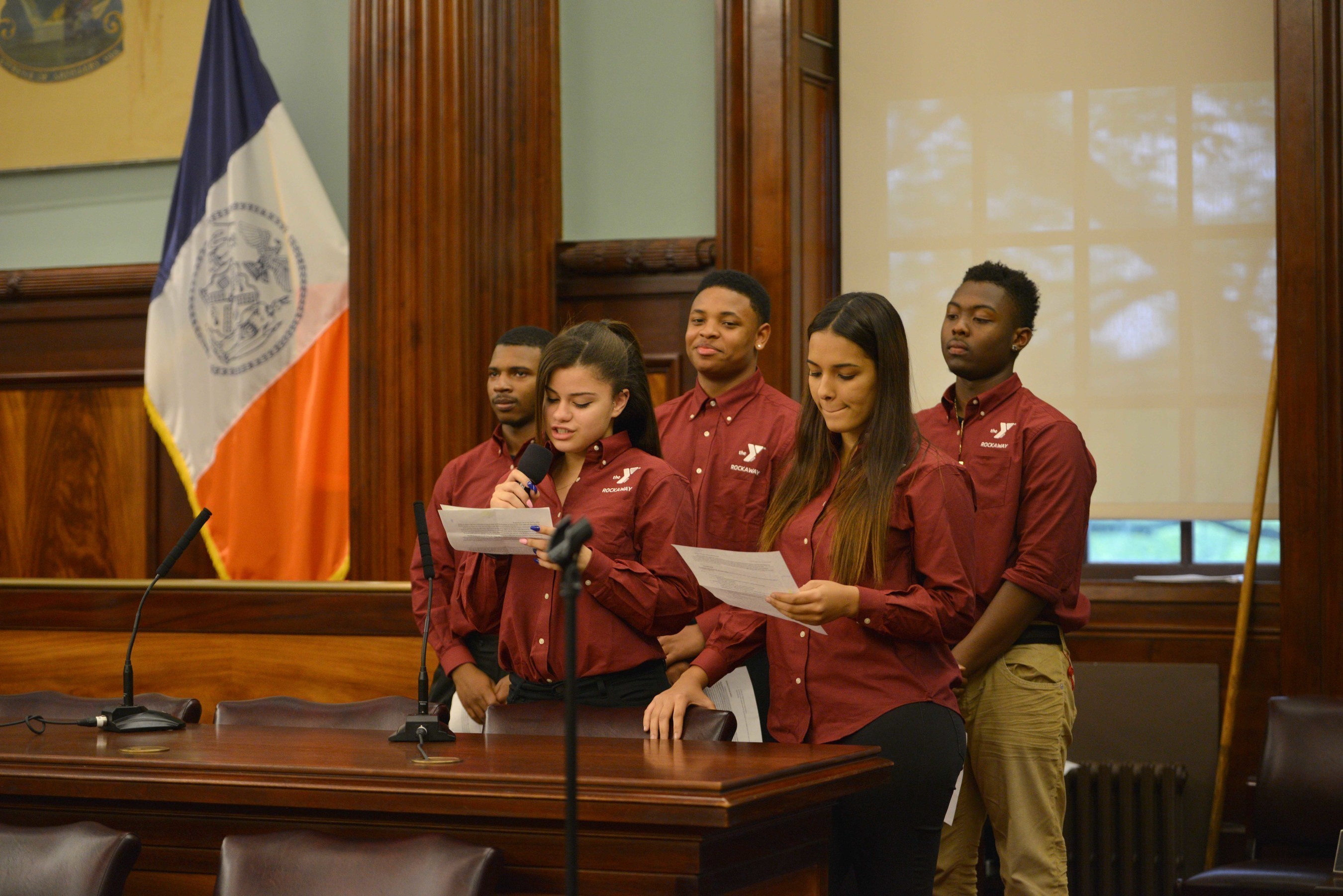 NEW YORK, May 19, 2016 /PRNewswire/ -- On Tuesday, May 17th, New York City's YMCA hosted more than 100 YMCA teens at City Hall for the eleventh annual YMCA Teens Take the City event. The teen participants held a mock-legislative session in the City Council Chambers to present and vote on this year's legislative proposals put forth by their peers. The session was presided over by a Teen Mayor and Teen Borough Presidents.

Council members Helen Rosenthal and Inez Barron, and Council Speaker Melissa Mark-Viverito were in attendance and expressed their appreciation for the teens being active participants in their local communities.

"Teens Take the City provides a platform for teens to test their ideas in the Chambers of City Hall. We can learn a lot from teens about how they view NYC's challenges and future," said Council Member Rosenthal.

YMCA Teens Take the City is a 20-week afterschool program that offers young people hands-on experience to learn how public policy is shaped on a local level and experience firsthand the democratic process. The development program offers teens the opportunity to get involved in issues affecting both themselves and their communities. These teens engage in community mapping to develop proposals which are then debated among other teens at City Hall. The goal of this program is to educate teens about skills needed to make a difference in New York City, and how to become active participants in school and their local community.

The teens served as "elected officials," including a Youth Mayor and City Council Members, to debate and vote on the following bills:

Ultimately, the youth council voted to pass eight of the ten proposals.

In speaking about the impact of this program on Tuesday night, Sharon Greenberger, President & CEO of New York City's YMCA said, "Teens Take the City helps young people to find their voices and to understand how they can personally and collectively inspire positive change in their communities."

About the YMCA of Greater New York
The YMCA of Greater New York is, and always will be, dedicated to building healthy, confident, connected and secure children, adults, families and communities. With a focus on youth development, healthy living and social responsibility, the Y nurtures the potential of every youth and teen, improves New York City's health and well-being and provides opportunities to give back and support neighbors. In scores of neighborhoods across the five boroughs and its camp upstate, the Y makes accessible the support and opportunities that empower more than 500,000 New Yorkers to learn, grow and thrive. Visit ymcanyc.org. Follow us on Facebook, Twitter, and Instagram at @ymcanyc.